To say that NFTs are becoming a desired commodity is an understatement. The rush is real, with prices spiking by and by. But thanks to NFT whitelist, a tool NFT communities now adopt to relieve transaction pressure and grant special minting privileges to some members.

Those with such benefits can mint NFTs, either for free or at a lesser price. And more interestingly, they even mint faster than others in the community.

So you have been seeing NFT whitelisting and wondering what it means? You will know what it is all about in this article and learn how you can get this privilege, too.

What Is NFT Whitelisting?

NFT whitelisting is the selective pre-approval of specific members of an NFT community to mint NFTs before their final release to the public. This usually depends on conditions decided by an NFT project team. So, a whitelist defines members of a project team with access to the first mint of an upcoming NFT.

In essence, such selected crypto wallet addresses have the power to mint an NFT before it becomes open to the public.

Further, the selected wallets get a scheduled time frame they can mint. Say, within 24 or 48 hours. This prevents the transaction scuffle and ridiculously heightened gas fee typical of most anticipated NFTs.

Consequently, whitelisted members enjoy hitch-free minting. And they may even do this for free or at a lesser gas fee, depending on the volume of transactions occurring at the time of minting—which, of course, is usually low since only a few people are minting.

Note that whitelisting can also come as a giveaway or reward for executing a task. So it’s not only meant for early joiners, after all.

And depending on the creators, they might hand you a token, which serves as a password for accessing your whitelist privilege to mint an NFT before its actual release. This password is called a whitelist token.

What Are the Benefits of NFT Whitelist?

While some people feel it’s an unfair play that benefits only a few investors, this doesn’t seem to be the purpose of a whitelist.

Indeed, the overwhelming influx of NFT collectors, resulting in high competition during transactions, and the need for project teams to reward early supporters and active members, are some reasons for the adoption of whitelisting.

Let’s dig further into the benefits of whitelisting.

Early supporters are the morale boosters of an NFT project. And whitelisting is one of the dividends they reap for joining early. It guarantees them a slot to be the first to mint an NFT or several before other investors can bid.

Thus, while the public still anticipates the release, whitelisted members get to mint first. This early-joiner benefit is one of the reasons many investors lookout for promising upcoming NFT projects on a recommender site like Moonly.

The launching of popular NFT projects often results in people competing to bid for them. But to create a demand pyramid, the more people that join an NFT project and bid for it, the higher the creators raise its price. And this can be scaringly high.

Whitelisting exempts specific members from experiencing such an impending struggle.

And since it schedules beneficiaries for minting, it’s a way to spread out buying, which reduces the transaction pressure that results from multiple buying requests, a process called gas war.

3. For Growth, and to Keep the Community Active

To keep an NFT project alive, project creators might ask their members to execute particular tasks. These might include inviting new members, sharing some posts on Twitter, and more. And in return, they promise to whitelist them.

What is a Whitelist Token?

As mentioned earlier, whitelisting privilege can come as a token. This token is an encrypted set of strings that acts as a security pass to access a whitelist benefit. Creators may decide to issue this token to whitelisted members so they can use it to access a mint earlier on.

When you get a whitelist token, it resides in your crypto wallet. And one advantage of such a token is it’s transferable. So you can resell it if you feel you don’t need a whitelist or the deal is right for you.

How Can You Get Whitelisted?

Some project creators state on their Discord server or Twitter page whether they use the NFT whitelist or not. So if you’re all out to get into the list, you want to look out for that piece of information first before joining the train.

With that said, the best way to get a whitelist benefit is to find upcoming NFT projects that interest you and join their Discord server as early as you can. And this is where Moonly comes through for you.

So at least, joining early keeps you updated about a team’s terms and policies earlier enough. Otherwise, a bit of delay, and the whitelisting train takes off.

Also, participation in a team’s giveaways and games, following their Twitter page, retweeting their posts, and abiding by their community guidelines on Discord might secure you a spot on the whitelist.

Some of them even reward members that invite other people to the community. Of course, all of these still don’t assure you that you will receive a whitelist privilege.

Moreover, as mentioned earlier, the team decides who gets into the list and who doesn’t. Ultimately, as stated, joining a team’s discord community early and getting active is a typical decision factor.

Winding Up: Beware! Don’t Get Scammed

Although NFTs are promising and great channels to passive income, undoubtedly, there are scams in the industry, too. Essentially, you want to be sure about how authentic a project is before getting enticed by a slot on their whitelist.

First, an NFT project without a Discord page and solid community is a red flag. Joined an NFT project, and the Discord channel is empty? Take to your heels!

Also, a brand with a vague trading history doesn’t seem like it. Most legit NFT projects have a solid track record of steady sales history with value.

Then if you’re not familiar with the supporting blockchain of an NFT project, you might be in for a fake deal. Ethereum, Solana, Tezos, Polygon, Cardano, and the Binance Smart Chain, are all examples of popular NFT blockchains. So watch out! 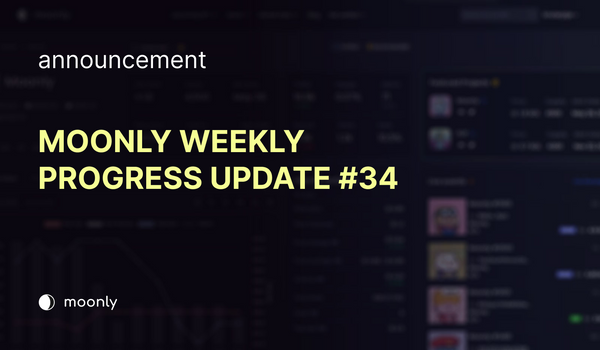 Hello everyone, how was your weekend? We are still in the testing phase, doing some minor adjustments and removing some bugs! Be patient friends, good days are coming! Weekly devs progress: Merge and deploy frontend updatesTested and fixed the issue of displaying the previous verification ruleFixed the logic for the

Cryptocurrencies would be bad investments without stablecoins. What are stablecoins, and why do they exist in crypto?

A very busy and productive week and a lot of UI/UX and SEO changes. We tried to focus on changing things on our app that will speed it up significantly. The user interface on some pages changed on Moonly for SEO optimization, on every page is added a sidebar